The F+ (donor) cell produces the pilus, which is a structure that projects out of the cell and begins contact with an F– (recipient) cell.

The pilus allows direct contact between donor and recipient cells.

Because the F plasmid consists of a double-stranded DNA molecule that forms a circular structure, that is, it is joined at both ends, an enzyme (relaxase or relaxosome when it forms a complex with other proteins) cuts one of the two chains. of DNA. from the F plasmid and this chain (also called the T chain) is transferred to the recipient cell.

In the last step, the donor cell and the recipient cell, both with single-stranded DNA, replicate this DNA and thus end up forming a double-stranded F-plasmid identical to the original F-plasmid. Since the F plasmid contains information to synthesize pili and other proteins, the former recipient cell is now a donor cell with the F plasmid and the ability to form pili, just as the original donor cell was. Now both cells are donors or F+. 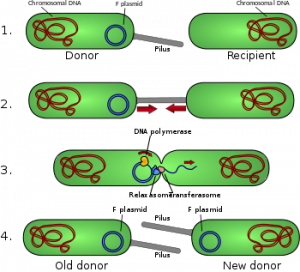 To prevent the transfer of the F plasmid to an F+ cell, the F plasmid often contains information that allows the donor cell to detect (and avoid) cells that already have one. Furthermore, plasmid F contains two major loci (tra and trb), an origin of replication (Orig), and an origin of transfer (Orig). The tra locus contains the genetic information to allow the donor cell to attach to a recipient cell: genes at the tra locus encode proteins to form pili (pilin gene) to initiate cell-cell contact and other proteins to attach to the F– cell and begin the transfer of the F plasmid. The trb locus contains DNA that encodes other proteins, including some that are involved in creating a channel through which DNA is transferred from the F+ cell to the F–. The Orig is the site where DNA replication occurs and the OriT is the site where the relaxase enzyme (or relaxosome protein complex) cuts the DNA strand of the F plasmid (see step 3 above).

The advantages of bacterial conjugation make this method of gene transfer a widely used technique in bioengineering. Some of the advantages include the ability to transfer relatively large DNA sequences and not damage the host cell envelope. Furthermore, conjugation has been achieved in laboratories not only between bacteria, but also between bacteria and cell types such as plant cells, mammalian cells, and yeast.